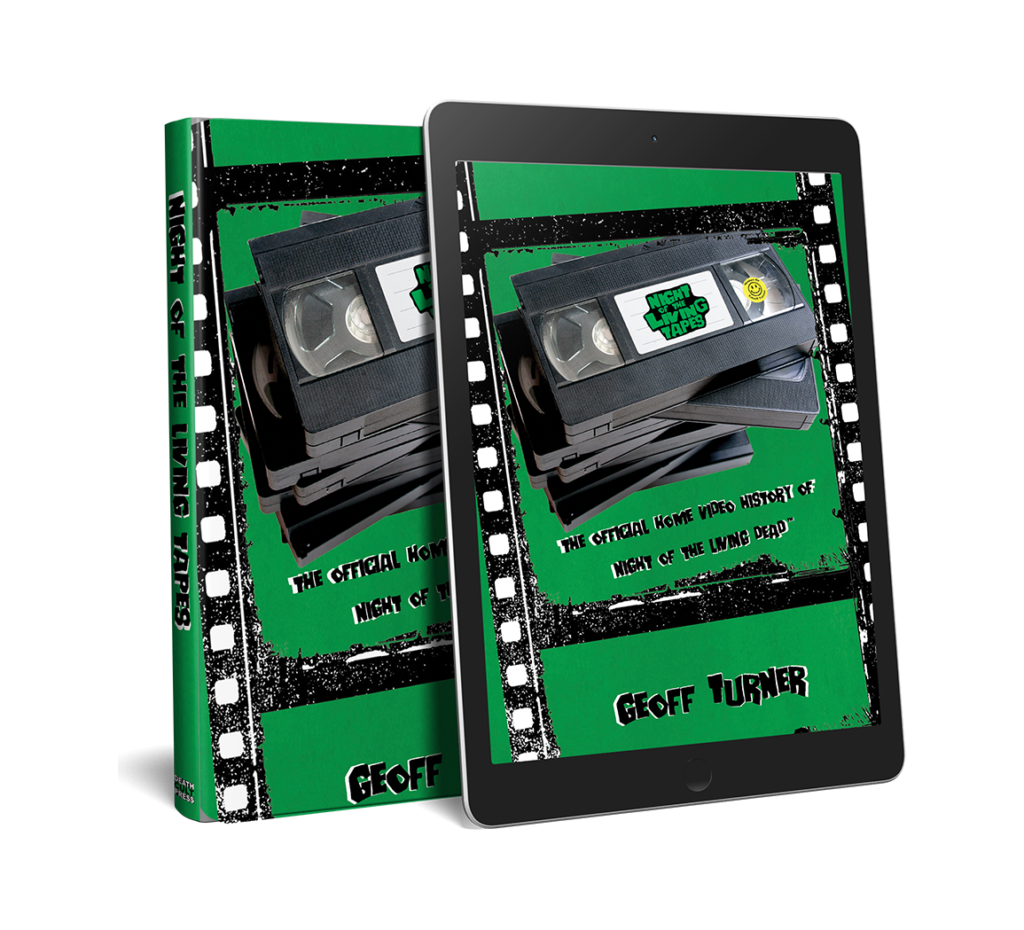 After a wildly successful Kickstarter campaign, Night of the Living Tapes released this October via the Death Cult Press official store, Amazon.com and Apple Books. Our Kickstarter campaign was successfully funded by 148 backers pledging over $19,000 on an initial goal of $3,000. The book is available in both print and digital formats. 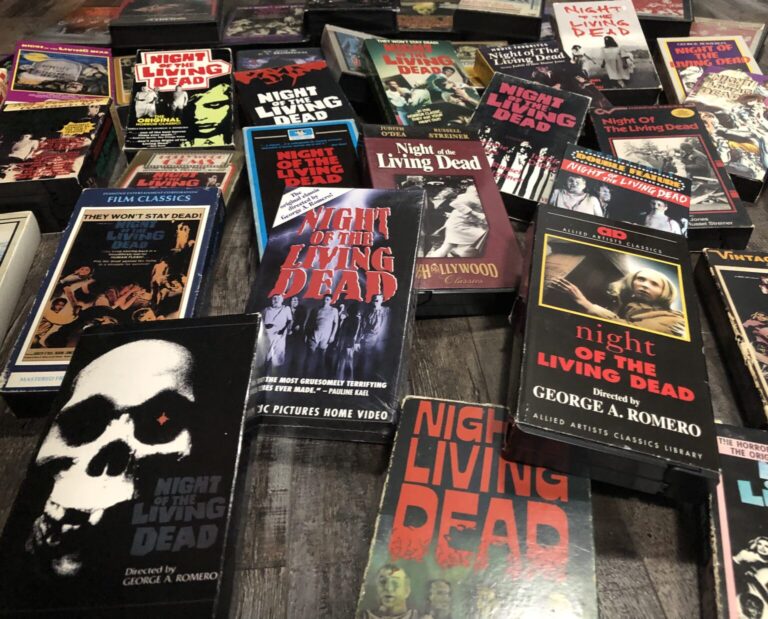 In 1967, a group of Pittsburgh-based filmmakers led by George A. Romero decided to venture into the business of making feature-length motion pictures.  Using their own money and equipment obtained as professionals in commercial film, television and radio production, the group opened their lenses in rural western Pennsylvania on a low-budget “Monster Flick.”

The resulting film, NIGHT of the LIVING DEAD, was both critically lambasted upon release, as well as a smash success at the box office.  The film has not only become recognized as a venerable classic of the horror genre, but as one of the great American-made feature films of all time, forever changing the way in which independent films are produced in the USA.

An error on the part of the film’s distributor, The Walter Reade Organization, combined with outdated copyright law, left NIGHT of the LIVING DEAD without enforceable federal copyright protection from the waves of home video distributors that began to spring up by the early 1980s.  Literally hundreds of different VHS, Betamax, LaserDisc, DVD and Blu-ray, as well as a myriad of other niche formats, were released worldwide, making NIGHT of the LIVING DEAD the most widely distributed film in the history of motion pictures.

Author and Living Dead collector Geoff Turner has meticulously cataloged video box art, promotional materials and distribution details gathered from collectors around the globe, to assemble NIGHT of the LIVING TAPES, the definitive compendium of the home video history of NIGHT of the LIVING DEAD, as authorized and approved by Image Ten, Inc., the film’s creators.

Image Ten is now pleased to bring you the premiere release of NIGHT of the LIVING TAPES in this Kickstarter campaign featuring limited edition collectors items from Witter Entertainment, Broke Horror Fan, Fright Rags, RJF Image/Design, and Misshapen Monsters.  Join us for a trip back to the era when motion picture exploitation campaigns were crafted with paste and ingenuity, and NIGHT of the LIVING DEAD dominated the shelves at video rental shops everywhere. 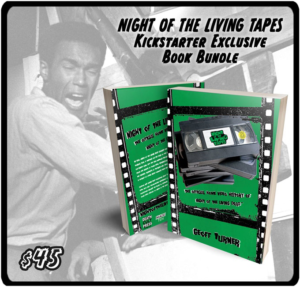 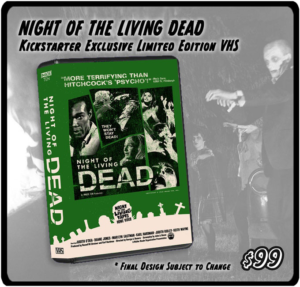 The VHS Level includes a limited edition NIGHT of the LIVING DEAD VHS, plus all items included in the Betamax level.  Produced by Witter Entertainment and Broke Horror Fan,  the VHS tape comes in a collector’s clamshell case with brand new art and features an video introduction by producer Russ Streiner.  This VHS release will only be available through this Kickstarter campaign, and not sold elsewhere else. 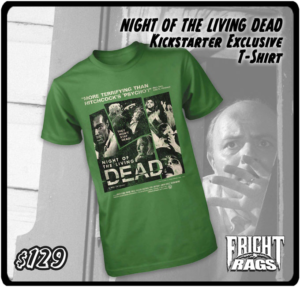 The LaserDisc Level includes all items from both the Betamax and VHS levels. plus a Kickstarter exclusive NIGHT of the LIVING DEAD t-shirt produced by the premiere horror apparel company, FRIGHT-RAGS. 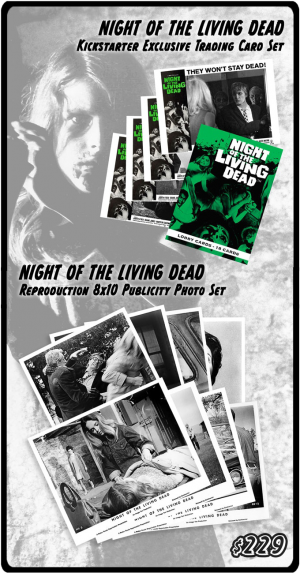 The DVD Level includes a Kickstarter exclusive NIGHT of the LIVING DEAD trading card set produced by RJF Image/Design,  and features 18 cards based on the original National Screen Service lobby cards.  Also included is a NIGHT of the LIVING DEAD 8×10 publicity still photo from Image Ten, featuring high-quality reproductions of the 30 publicity stills originally used to advertise the film in 1968. 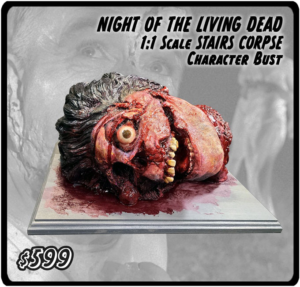 You can have all with the Blu-Ray Level, which includes a limited edition 1:1 scale character bust of NIGHT of the LIVING DEAD’s Stairs Corpse produced by Misshapen Monsters!  This resin bust measures approximately 14″ in length and is mounted on a display base with movie nameplate.

Only five of these busts painted in living dead color. will be available exclusive through this Kickstarter campaign.  Plus receive all items included in the previous Betamax, VHS, LaserDisc and DVD levels for the ultimate NIGHT of the LIVING DEAD collection! 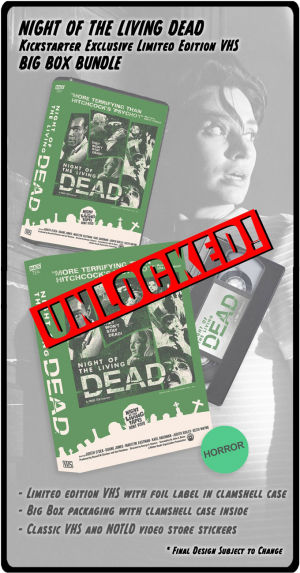 what others are saying

Geoff Turner is the owner of one of the largest collections of Night of the Living Dead VHS tapes and memorabilia in the world. He is a writer, film historian and also served as a practical special effects artist on several independent feature films. He can be found online sharing his collections on instagram as @giallocaust and @nightofthelivingtapes. Geoff lives in Dayton, Ohio. 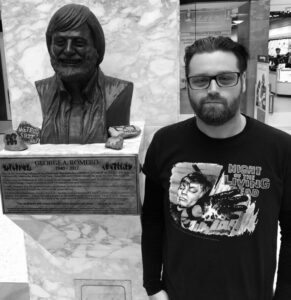 Night of the Living Tapes.pdf